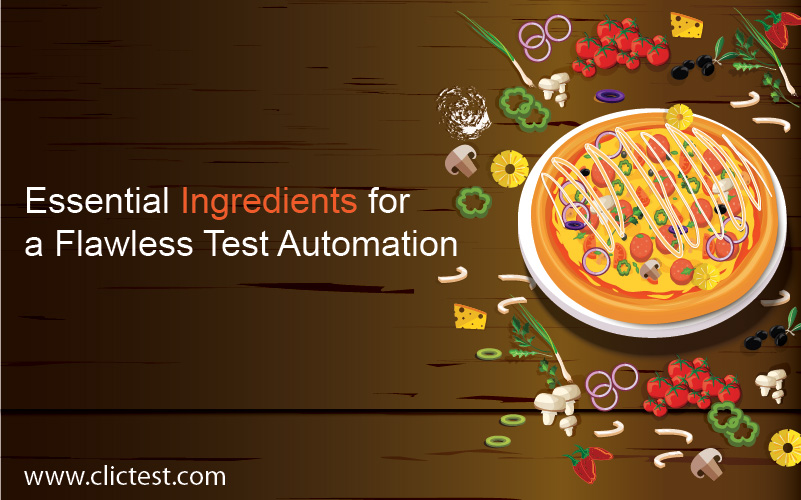 Information technology emergence has pushed the businesses towards growth so fast that it has made automation a mission critical activity. Automation has become inevitable in Software Industry also. It has been revolutionizing the way the software is developed and delivered. Automation Testing is one such concept that evolved to automate a few manual testing tasks that consume a lot of time and effort. Automation Testing has become vital to ensure the quality of the developed software before its release.

Agile and Continuous Integration and Continuous Delivery methodologies have evolved in favor of delivering the software faster. Software test automation blends perfectly with these methodologies for accelerating the time to market. But achieving a flawless test automation is same as preparing a delicious dish where essential ingredients play a vital role in the success.

Here are a few essential ingredients for a flawless test automation:

Scope is the first ingredient that you should define first

You can get the most out of Automation Testing, when you define its scope in a right way. The first aspect that your scope should cover is, which features or functionalities of the application under test (AUT) should be automated. Testing a stable functionality should be automated first; if you automate the unstable feature, then your testing team will be wasting a lot of time and effort as the feature may tend to change in the future.

Automation testing comes very handy in saving time and efforts on repeating the execution of the test cases whenever there is a need, and to test a functionality with different data set combinations to validate its behavior across the user input combinations. For example, it is essential to validate the user inputs to login to the application with different sets of data when testing a login page to ensure its functionality. Doing all the above manually is not at all feasible. So, the scope of automation testing is the first step towards implementing a flawless automation testing and making it successful.

Manual Test Cases are input for Automation, so automation test cases inherit the effectiveness that manual test cases have.

But What makes a test case to be called as nicely written one?

A manual test case should have all clearly defined prerequisites and test data to drive test forward. Test steps and the expected result of the test should be clearly written, which makes sure the objective of the test. With an understanding of test steps to be performed, expected result and objective of the test, automation test engineers create effective automation test cases by identifying what all objects should be captured and what will be the navigation in the application.

The success of automation testing relies on test design, so it is one such ingredient that requires your attention.

Faster execution of test with quickly released results is only possible with Automation Testing but relying on it completely for the quality is not advisable. Test scenarios before they are automated, you need to ensure that they are tested manually and after automation testing before the release doing at least exploratory testing is recommended. Manual testing with test automation gives the highest possible quality to the application.

Most people think that automation testing can be leveraged only for regression testing, but automating smoke tests, acceptance tests, and all those tests that consume a lot of time and effort to run more often yields better outcome from test automation. When automation testing takes care of those tasks that are repetitive, then manual testers can focus on exploring test scenarios that improve the quality of AUT.

Companies have a wide range of tools to choose from, so while deciding a tool a lot of aspects have to be taken into consideration. Selecting the right tool is not the end of the process rather it is the start, where you need to leverage all the above-mentioned ingredients through an automation tool to implement flawless and successful test automation.

Scriptless Automation Testing tool like “ClicAutomate”, offered by ClicTest, can pave the way for a flawless test automation and to get the best out of automation testing. Manual testers with the knowledge of the AUT and Subject Matter experts with the knowledge of the vertical that AUT belongs to, are empowered to automate different types of testing from smoke to acceptance testing. This results in delivering a quality software at a faster pace so that businesses can have a software that meet their prevailing business needs sooner.